Enjoy the views of a laurel forest and the East China Sea.

Mt. Kaimon (Kaimon-dake) is in Kagoshima prefecture, Kyushu, within Kirishima-Kinkowan National Park.
Selected as one of Japan’s 100 most famous mountains, it features a beautiful conical shape jutting out into the East China Sea.
The mountain path spirals up from the foot of the mountain, such that you can enjoy the scenery from a variety of angles.
Since there are no surrounding mountains, the view from the peak is superb, and the mountain is a symbolic presence for the people living at the foot and for visiting tourists as well.

Walk about 15 minutes from the paved road in Kaimon Sanroku Fureai Park to arrive at the second station trailhead.

From the second station trailhead, the path becomes the hiking path for the lapilli of the laurel forest.

Your field of view gradually opens up such that you can start to see the Osumi Peninsula on the opposite coast of Kagoshima Bay. The path becomes a volcanic rock hiking path at the sixth station.

From the peak, you can not only see the mountains in Kagoshima such as Kirishima mountain range (Kirishima-renzan) and an active volcano called Mt. Sakurajima on clear days, but you can also see to Yakushima Island on the other side of the East China Sea.

To descend the mountain, go back along the route you came. 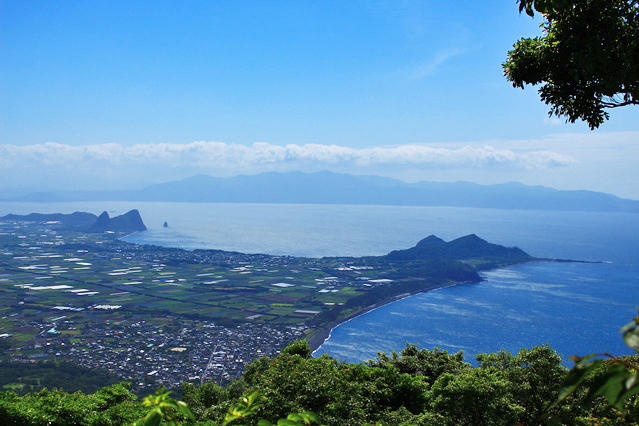 View from the fifth station

Around the periphery of Lake Ikeda (Ikeda-ko) located northeast of Mt. Kaimon, yellow rape blossoms bloom from February to March, harmonizing with Mt. Kaimon and creating a gorgeous scene.
Also, the Ibusuki Onsen (hot spring) between Mt. Kaimon and Kagoshima-Chuo Station is a facility where you can experience the heat of the hot spring water emerging from the coast while submerged in the sandy beach, that is only found in Japan.

Since Mt. Kaimon is a volcano, the mountain path from the second station to the sixth station is slippery and covered with lapilli. It’s best to bring stock.
Near the peak, the path is steep and rocky, so bringing gloves is recommended.