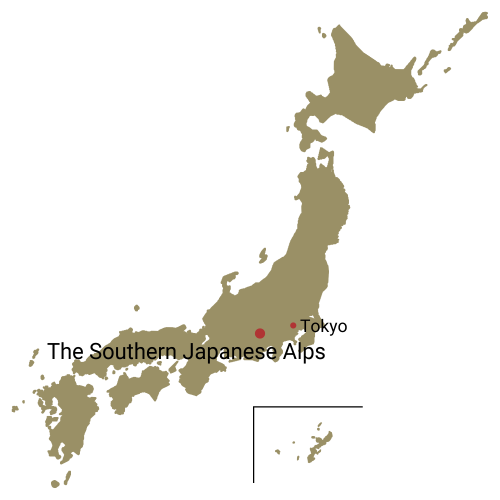 The Southern Japanese Alps is a vast mountain range that spans over the prefectures of Nagano, Yamanashi and Shizuoka, including 13 peaks that are over 3,000 meters in altitude, and 10 of Japan’s 100 most famous mountains being interspersed from north to south.

The range is also selected as Minami Alps National Park and UNESCO’s Eco Park (Biosphere Reserve), and is characterized with less-eroded, gentle slopes of massive mountains, compared to the sharp ridges of the mountains of the Northern Japanese Alps.

The ridgeline extending from Mt. Kai-Komagatake in the north towards the Three Peaks of Mt. Houou (Houou Sanzan) in the southeast via Hayakawa-one Ridge is composed of granite, and is characterized by a white mountain surface.

On the other side of the Noro-gawa River, facing the southwest of this ridgeline are the Three Peaks of Mt. Shirane (Shirane Sanzan), which contains a row of mountains over 3,000 meter-high, including Japan’s second and third tallest mountains, Mt. Kitadake and Mt. Ainodake respectively, along with Mt. Notori (Notori-dake).

On the southwest of Mt. Kai-Komagatake, across the Kitazawa-toge Pass is serviced by a forestry road up to a point just above 2,000 meters in altitude, is Mt. Senjogatake, interspersed with several glacial valleys. The Senshio-one Ridge that extends from Mt. Senjogatake to Mt. Shiomi (Shiomi-dake) in the south is the main ridgeline of the northwestern part of the Southern Japanese Alps, which is located to the west of the Three Peaks of Mt. Shiramine across the Oi-gawa River Higashimata area. It leads the way to the Sanpuku-toge Pass, which is considered to be located at the highest elevation.

Mt. Tekari (Tekari-dake), located on the southwest of Mt. Hijiri, has a forest-covered peak and is Japan’s southernmost mountain over 2,500-meters high, as well as the world’s southernmost natural habitat of stone pine.