Tour around the magnificent volcanic landform and crater lakes.

Mt. Zao (Zao-san) is a volcanic group located on the prefectural border of Yamagata and Miyagi Prefectures in the Tohoku region, and is selected as one of Japan’s 100 most famous mountains. At the summit there is a giant crater lake named Okama, which is 300 meters in diameter and is filled with water that changes colors according to the volcanic activity and water quality. This course introduces a route that starts from Mt. Jizo (Jizo-san) on the Yamagata Prefecture-side, via the highest peak, Mt. Kumano (Kumano-dake), to the summit of Mt. Katta (Katta-dake) along the crater wall of Lake Okama, eventually descending to the Miyagi Prefecture-side.

Getting off Zao Ropeway at Jizo Sancho Station, hikers will find a giant Jizo stone statue.

Walk on the wooden walkway and hike up the slope among the bamboo grass field spattered with Aomori Todomatsu (Aomori white fir) trees for approximately 15 minutes, and hikers will arrive at Mt. Jizo. The summit offers a great view with the Three Mountains of Dewa (Dewa Sanzan), Iide Mountains (Iide-renpo) and Asahi Mountains (Asahi-renpo) in sight.

Descend for approximately 10 minutes to the fork where Wasa-goya mountain hut once stood, then ascend approximately another 25 minutes up the slope interspersed with giant rocks to get to Mt. Kumano.

Descend the gentle slope for approximately 10 minutes to get to the Mt. Kumano fork, then proceed southward on the ridgeline, named Umanose, along the crater wall.

Hike through the Zao Highline endpoint where parking lots, restaurants and shops are, and ascend for approximately 30 minutes to get to Mt. Katta, where a shrine and shelter hut stand.

Descend gently on the ridgeline of the crater wall for approximately 40 minutes to get to Daikokuten bus stop.

Another recommendation is the southern Zao traverse route, which descends from Mt. Katta to Katta-toge Pass and through a beautiful wetland named Shibakusa-daira, the summits of Mt. Byobu (Byobu-dake) and Mt. Fubo (Fubo-san) and eventually descends to Miyagi Zao Shiraishi Ski Area. 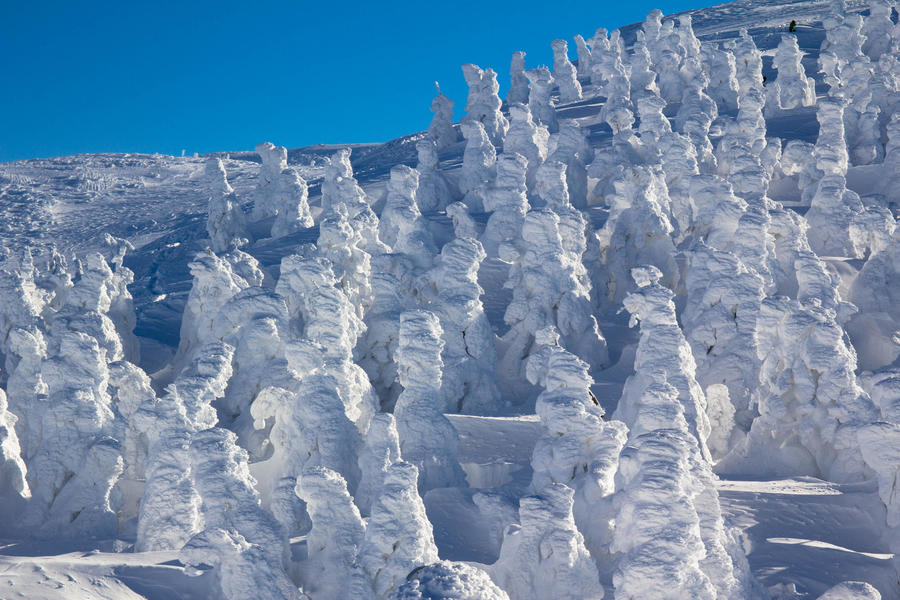 Mt. Zao is famous for being one of the few mountains where silver frost can be seen in Japan. Aomori Todomatsu trees covered in silver frost are referred to as “snow monsters,” and can usually be seen from January to February.

This route consists mostly of broad rocky trails and is well-equipped with guideposts and fences. However, when the weather condition is bad due to thick fog and such, hikers need to take caution not to get lost. Also, the volcanic activity has been active in recent years, collecting sufficient information prior to hiking is strongly recommended.