Hakone is a town located in western Kanagawa Prefecture about an hour and a half train ride from Shinjuku Station in Tokyo. It was the location of a checkpoint on the Tokaido Road, one of the five major highways collectively referred to as the “Gokaido” built by the Shogunate during the Edo Period to connect the capital Edo with the rest of the country.” The section between Odawara City in Kanagawa Prefecture and Mishima City in Shizuoka Prefecture, which includes Hakone-toge Pass, is known alternatively as the Old Hakone Highway (Hakone Kyu-kaido) and the Hakone Hachiri. It was known to travelers at the time as being one of the most difficult parts of the Tokaido Road due to the steep mountainous terrain.

Today, Hakone is a popular tourist destination for its hot springs and its views of Mt. Fuji (Fuji-san). Part of the old highway, or “Kyu-kaido” in Japanese, is now a hiking course where you can truly feel the history of the region.

Alyona from Russia hiked the historic old road in Hakone together with a local guide, Mr. Kaneko .

After getting off the bus from Hakone Yumoto, they hiked a nature trail along the Sukumo-gawa River. The perfect timing of the visit allowed them to enjoy the vibrant fresh green leaves and the invigorating fresh air. Along the trail, they went out into the river to sit on a moss-covered rock where they relaxed for a while. 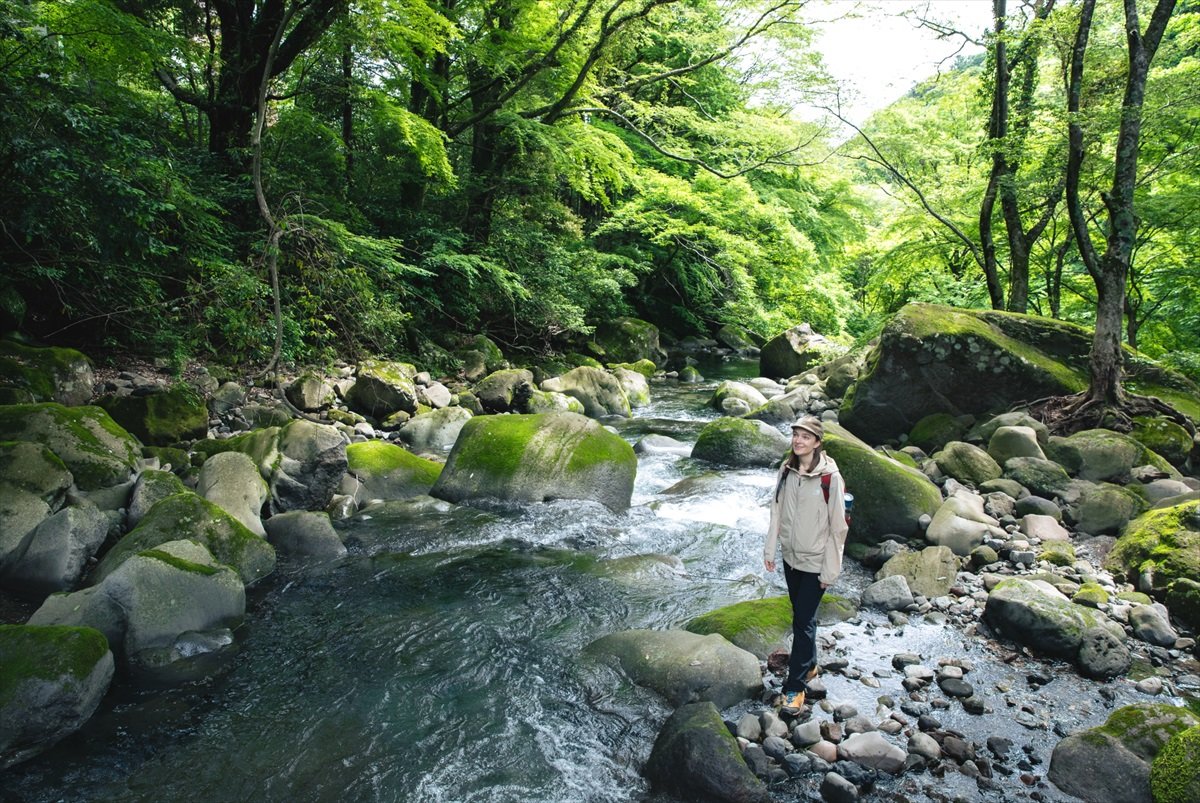 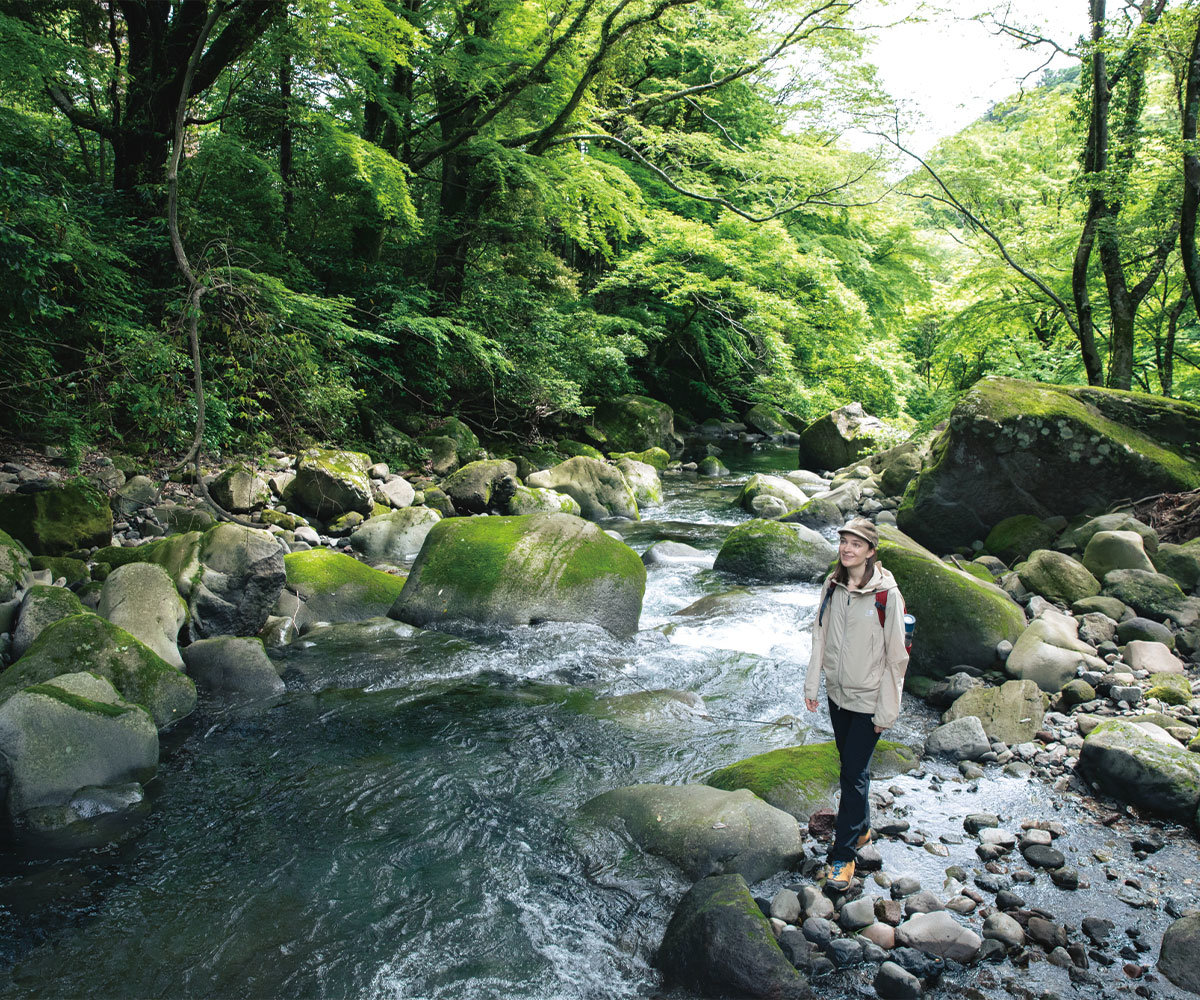 Good days for hiking are few and far between during tsuyu, Japan’s rainy season. If you are lucky enough to catch a sunny or cloudy day, though, you will be able to enjoy one of the unique delights of tsuyu: the sight and aroma of fresh green leaves. You can enjoy them while walking along Sukumo-gawa River. Although the nature trail gets slippery after rain, if you visit on a day after it rains, I guarantee you will be recharged after smelling the fresh green leaves. Their color and the sound of the river will heal you soul tired of the daily grind.
-Alyona

Rest Stop at a Historic Teahouse

The Amasake Chaya is, as the name suggests, a chaya that serves amazake. Chaya, meaning teahouse, were a type of rest stop in medieval Japan that served tea, sweets, and other refreshments. This historic chaya has been in business since the Edo Period. Amazake is a traditional Japanese drink made from sweetened fermented rice. It is most commonly made from kome koji, rice inoculated with a type of mold used in the fermentation of foods, or from sake lees, a byproduct of the sake-making process.

The teahouse features an open interior that is quite dark inside due to the minimal lighting. The openness is due to the fact that Japanese homes have traditionally been designed first and foremost with the country’s hot and humid summers in mind. The darkness, meanwhile, is based on the idea that the darkness is the essence of Japanese aesthetics. 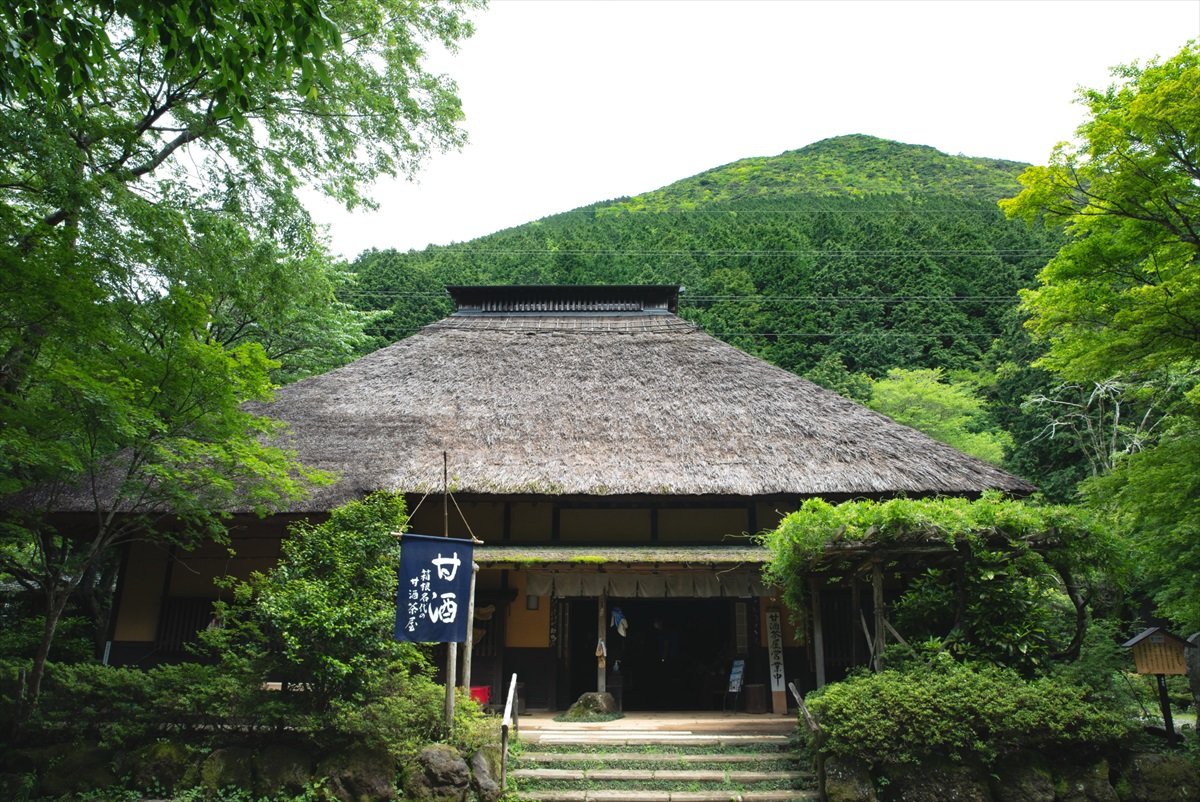 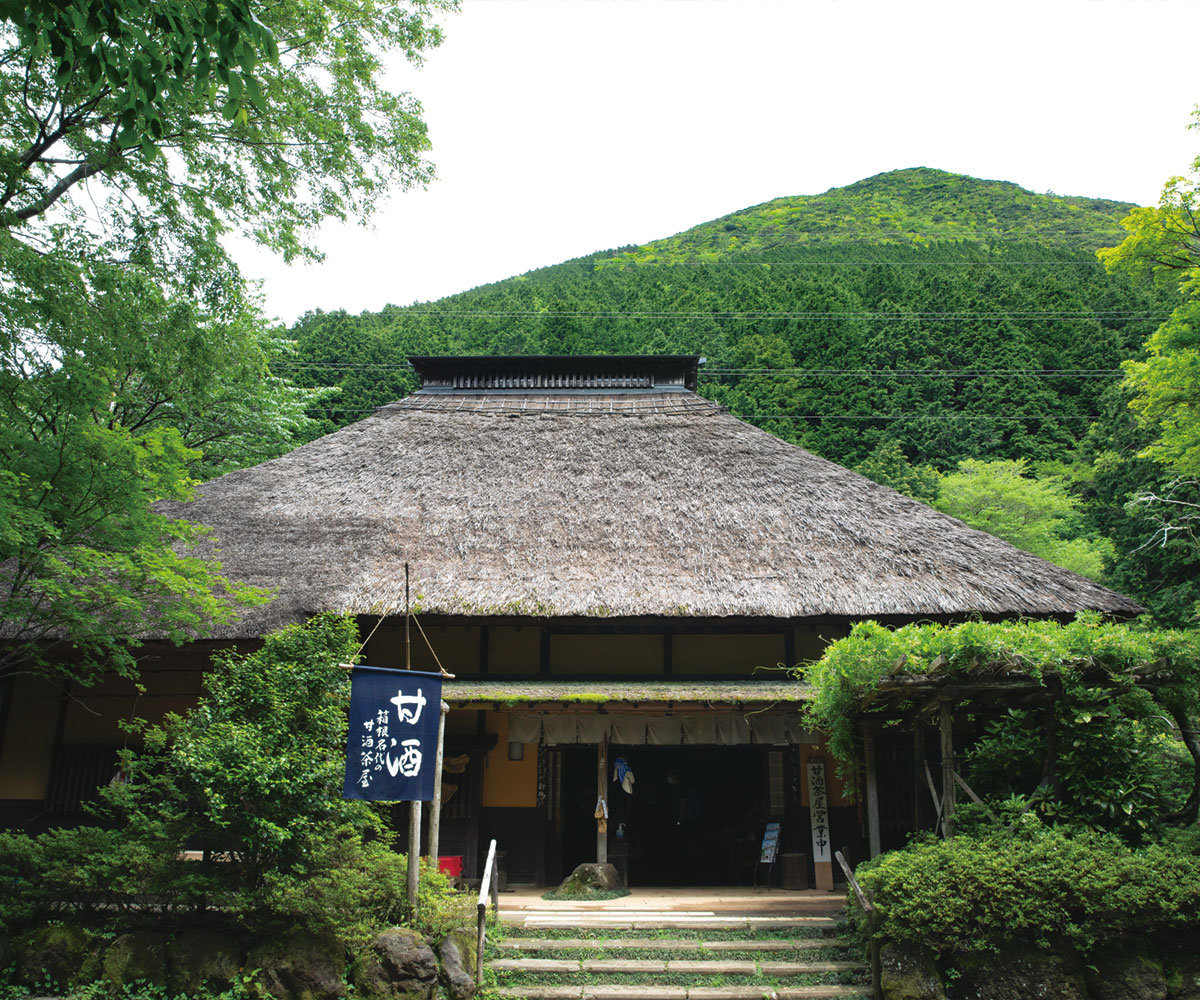 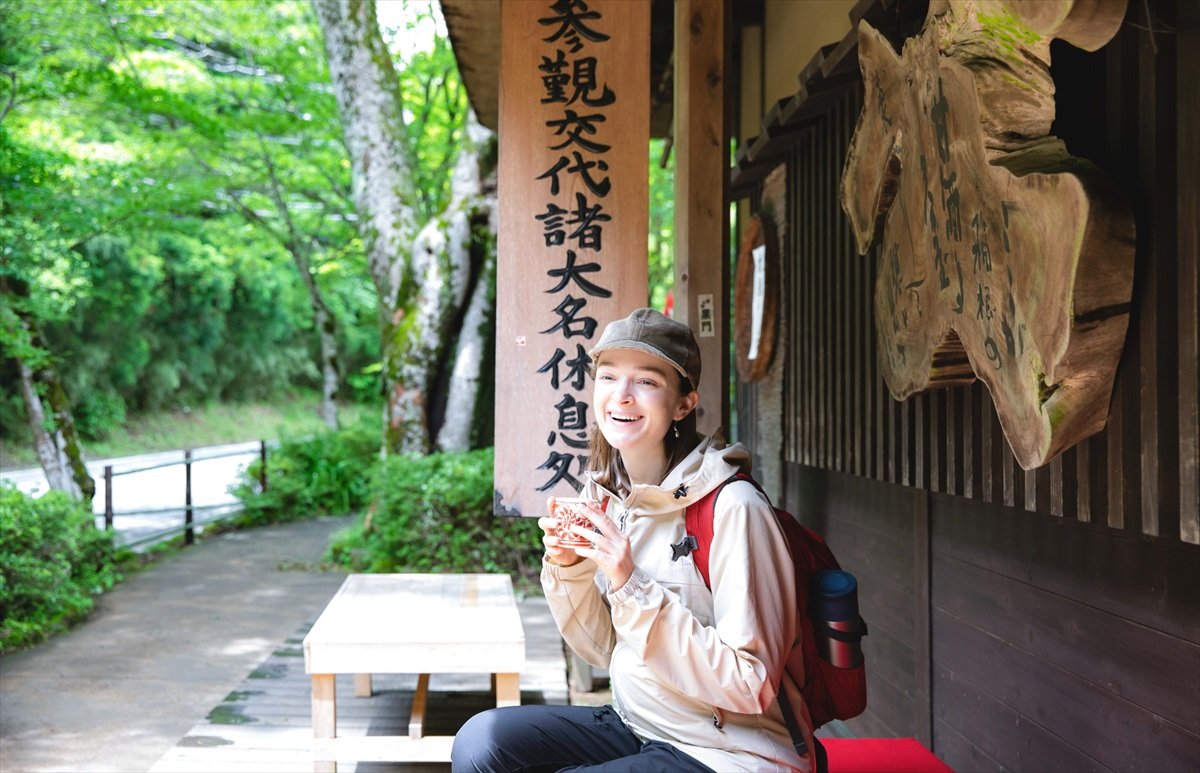 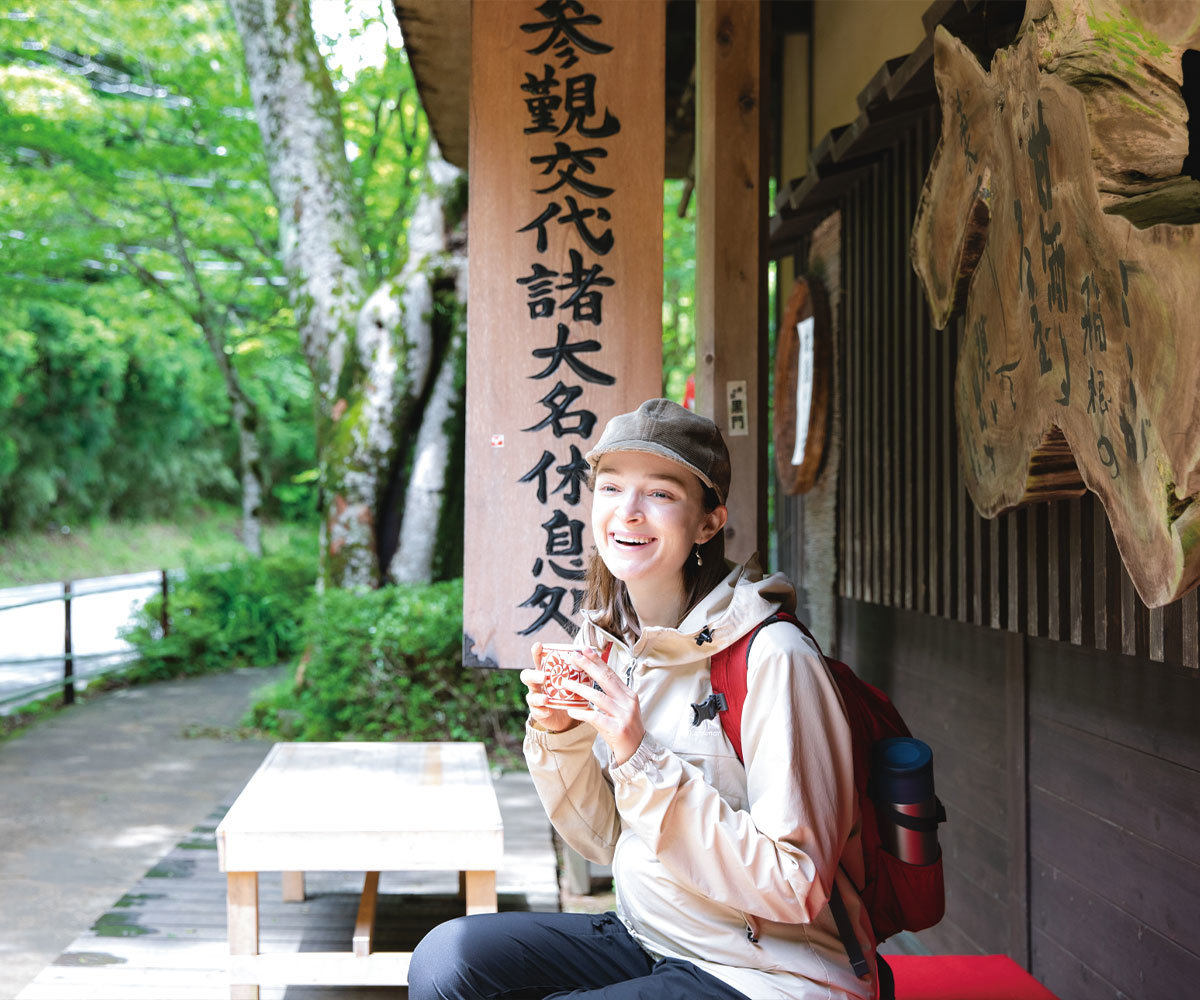 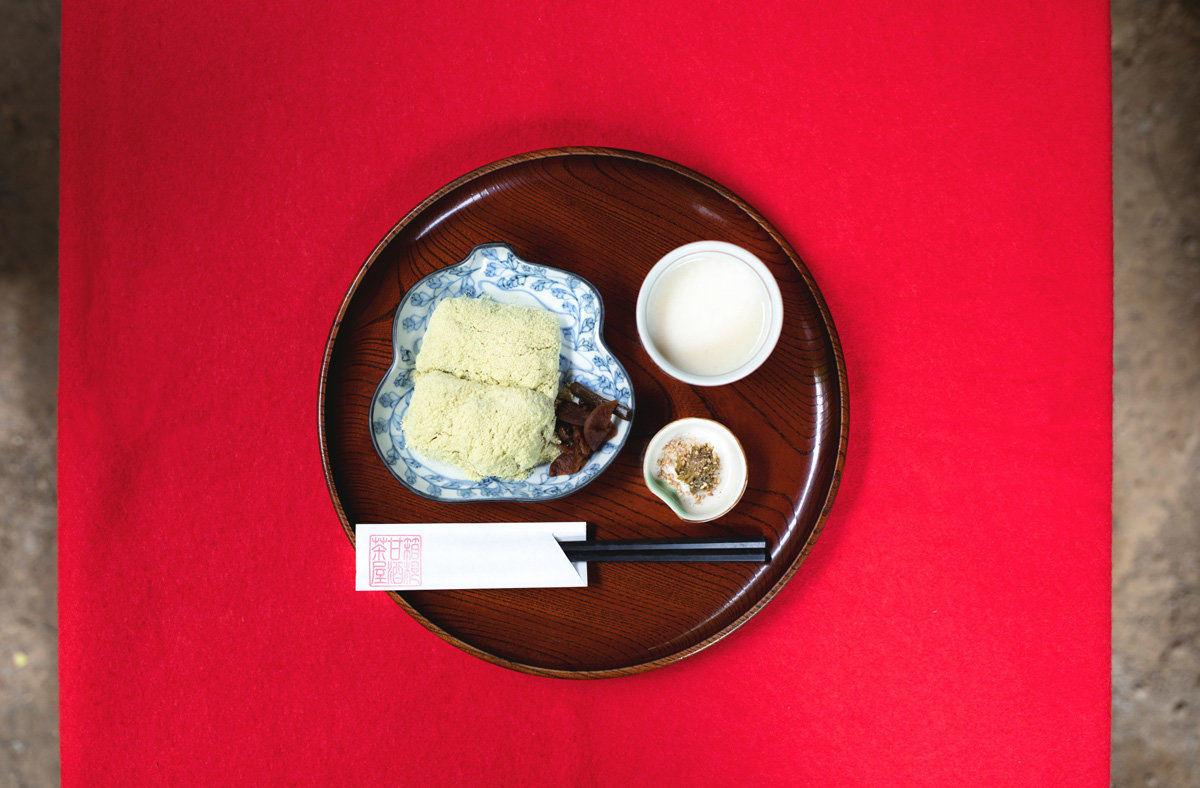 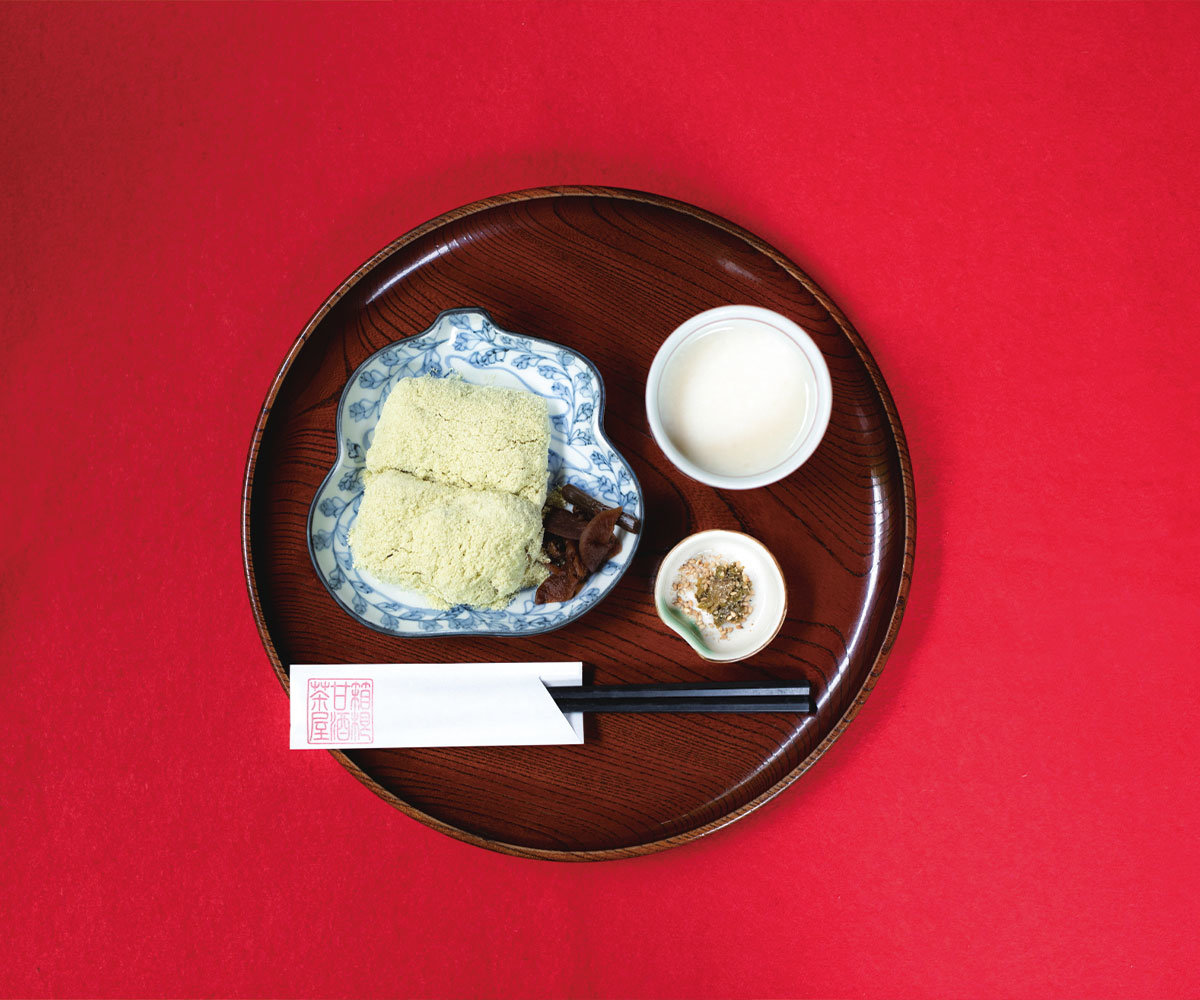 The owner of Amasake Chaya is doing his best to preserve the taste and the atmosphere of the teahouse for future generations. The mochi rice cakes and the amazake they served are the best I have ever had. It was fun to travel back in time to the Edo Period and to enjoy the teahouse’s heartwarming atmosphere.
-Alyona

Sometime after leaving the Amazake Chaya, they arrived at a cobblestone road. The cobblestones were installed around 1680 by the Shogunate in order to improve the walkability of the steep, muddy slope. The cobblestones are slippery when wet as they have been worn smooth by more than a century of foot traffic. Mr. Kaneko, the guide, mentioned that “It is said the rice straw sandals worn at the time provided surprisingly sure grip on the cobblestones.” 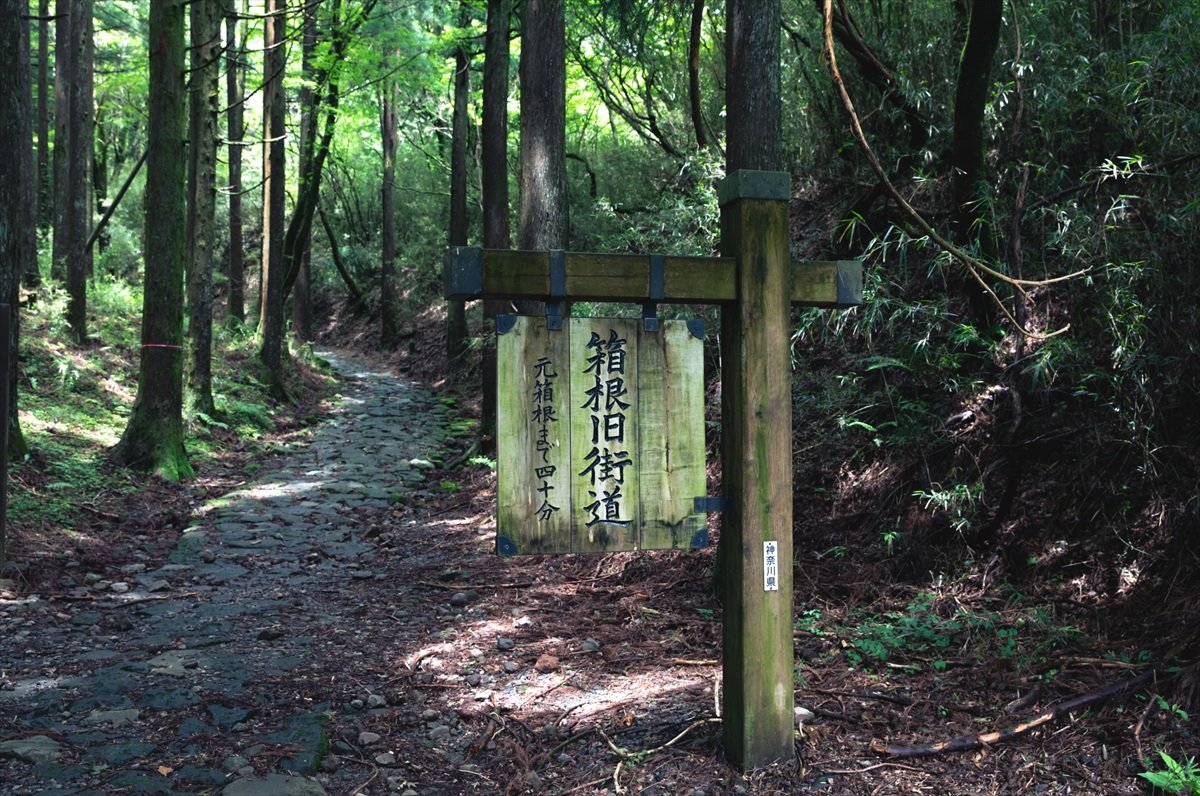 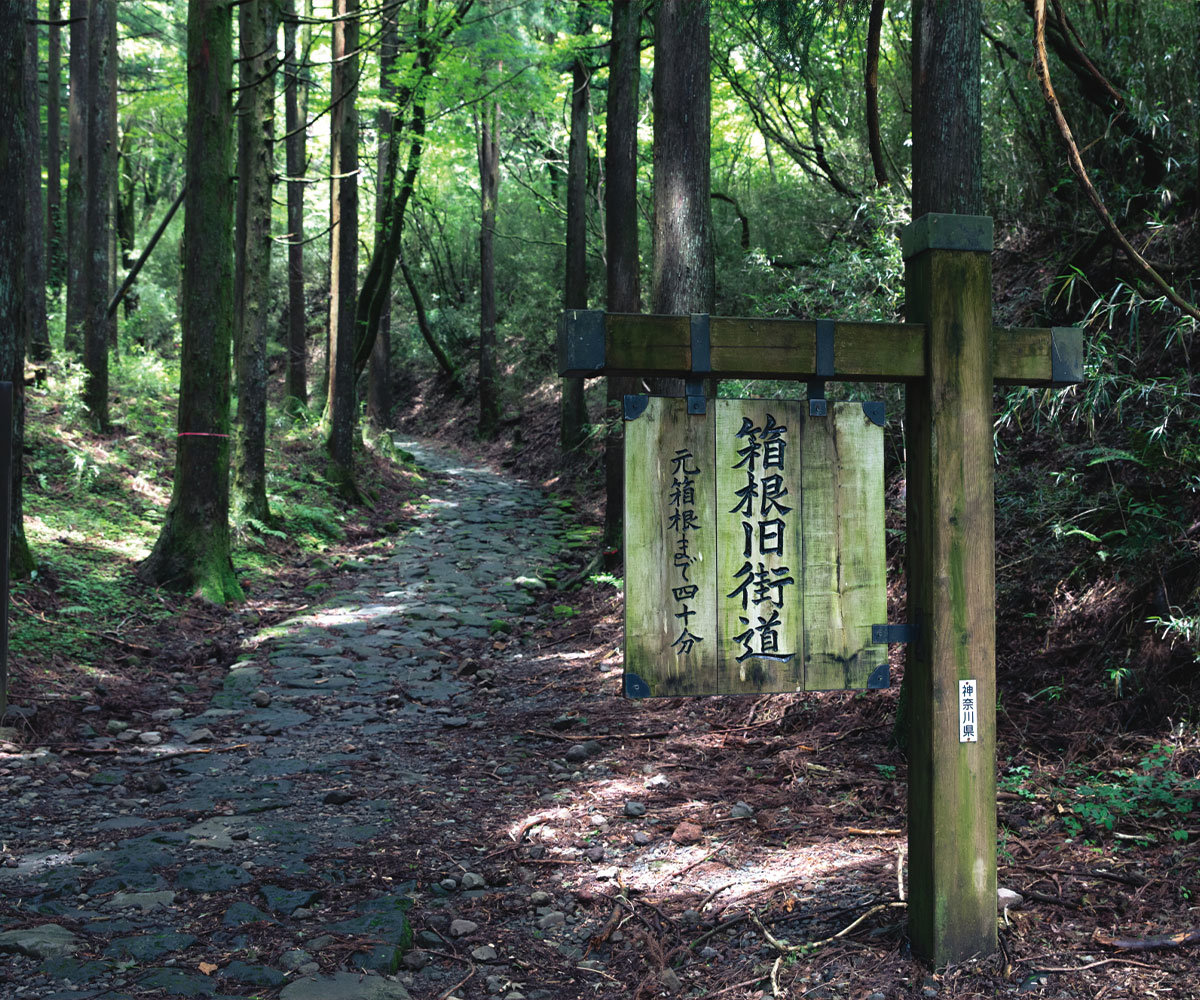 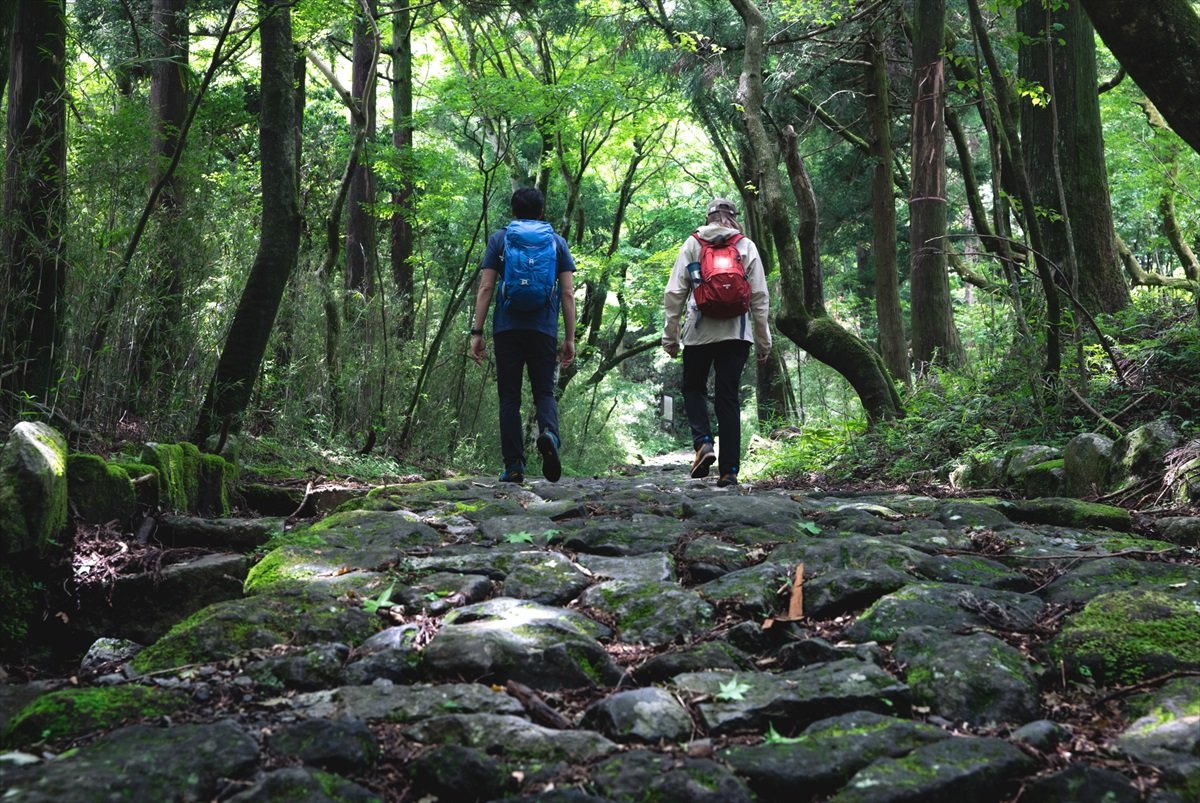 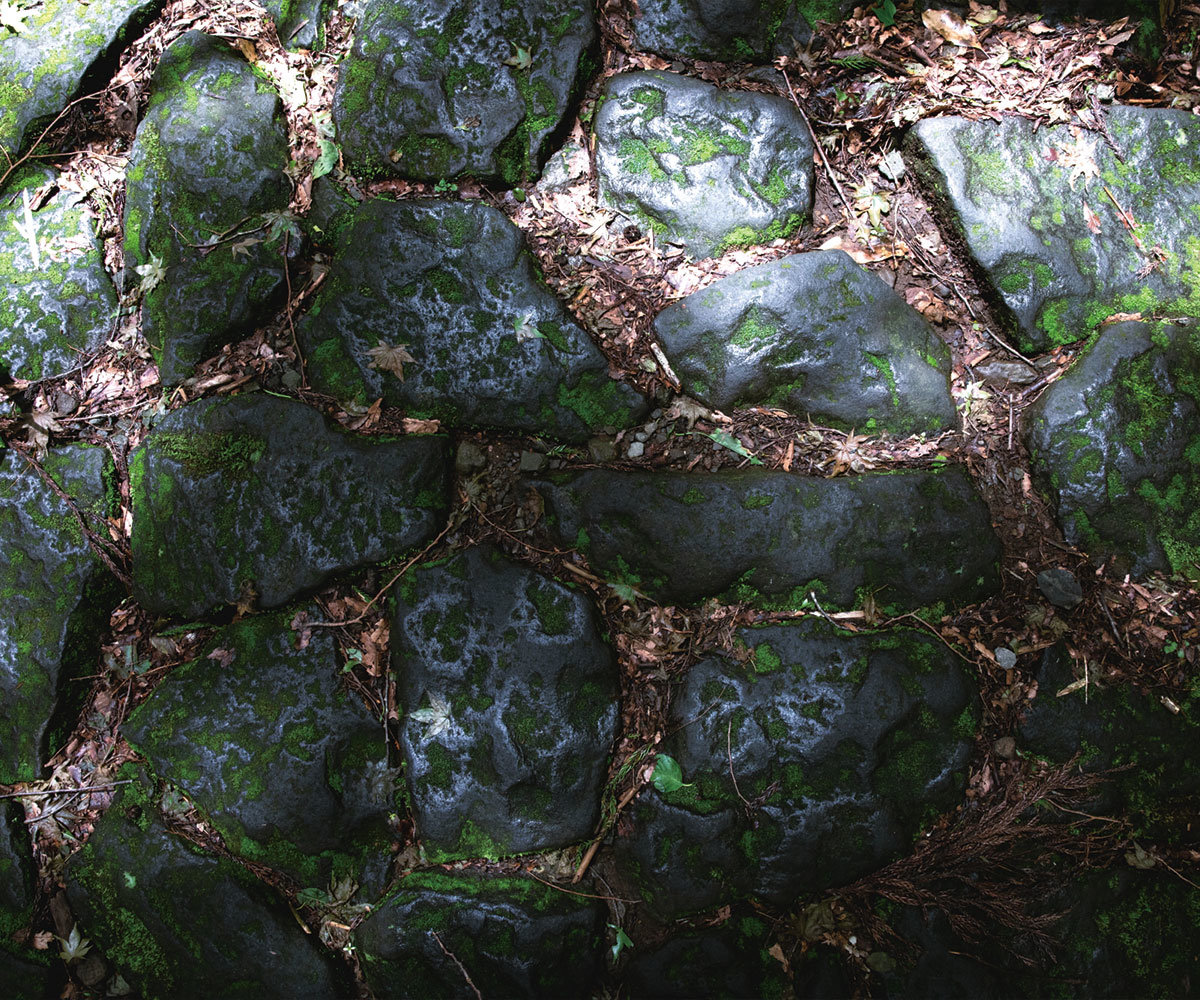 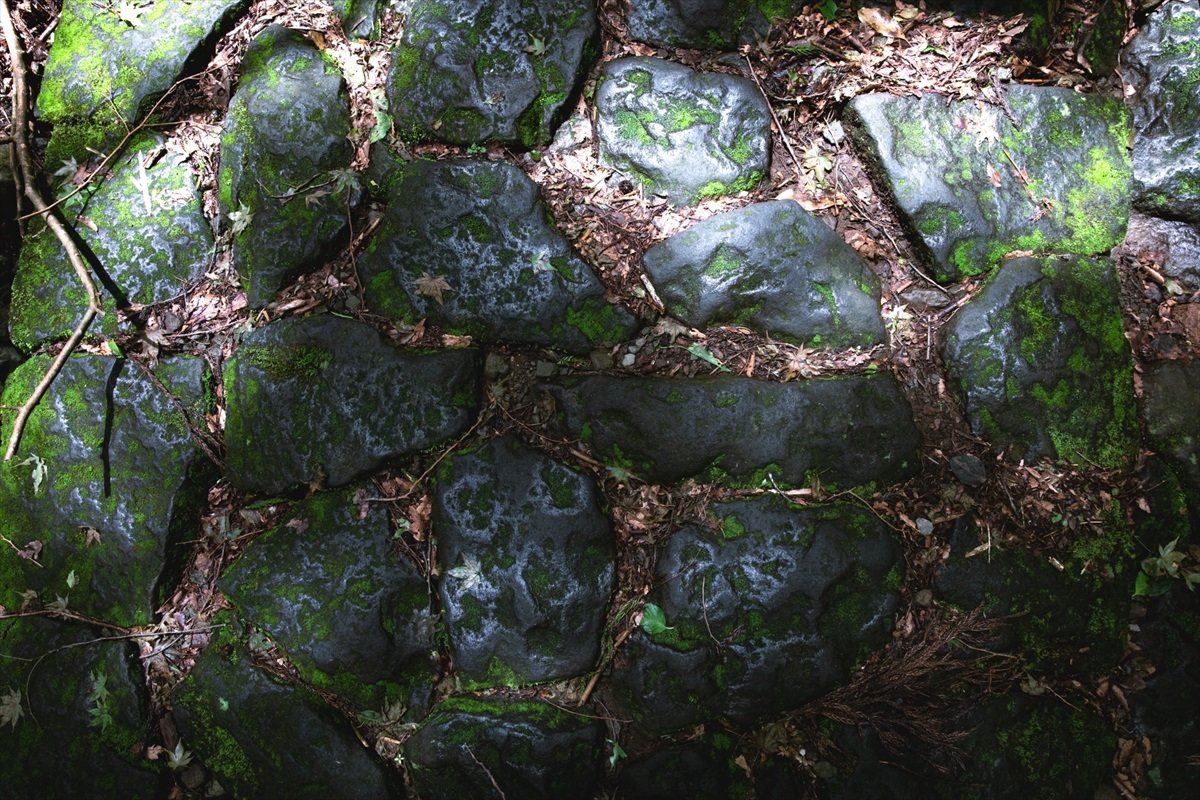 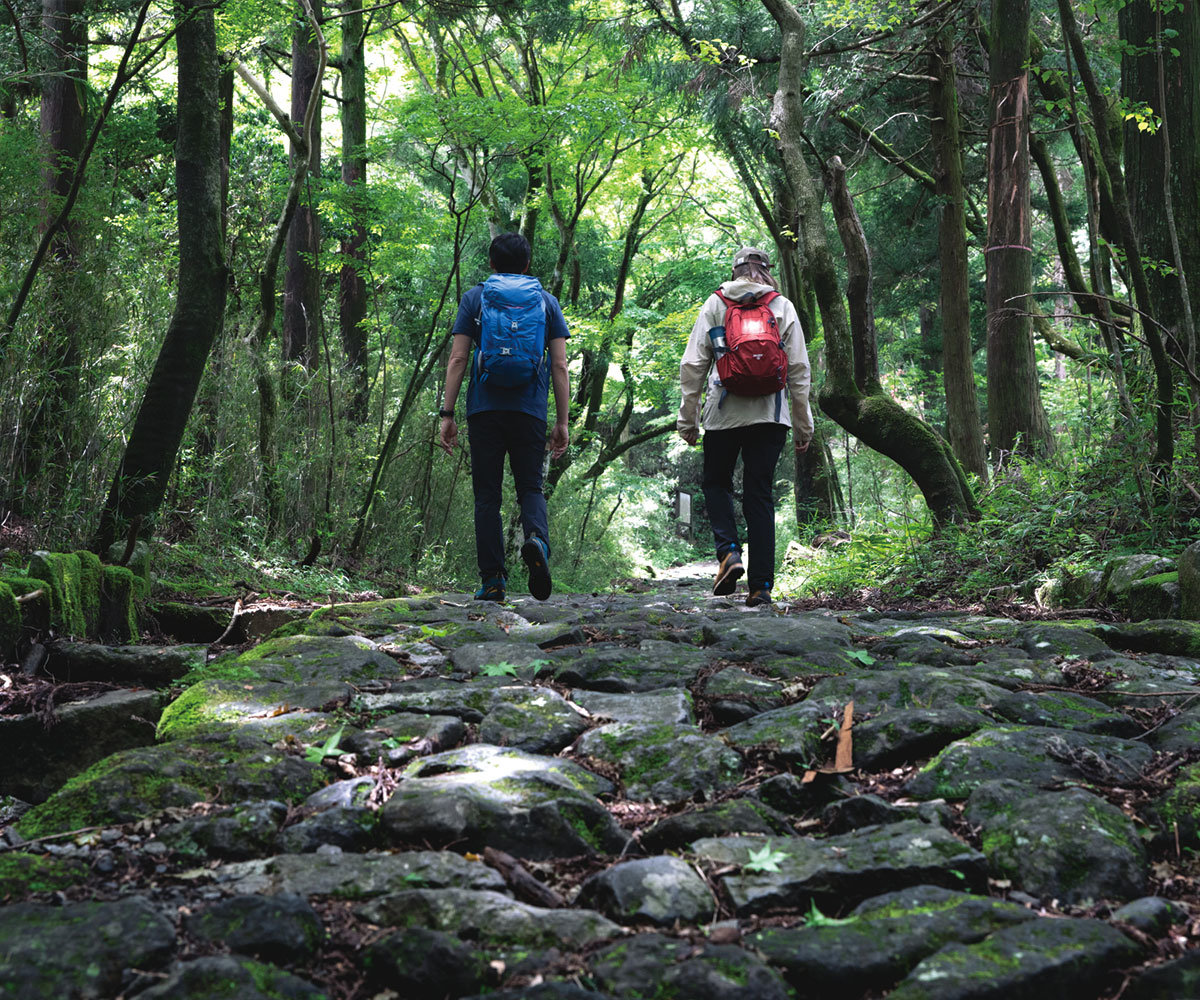 Today, it is possible to safely travel from Tokyo to Kyoto in less than three hours by the Tokaido Shinkansen. However, for people in the past, it was a long and life-threatening journey. The Hakone Hachiri was the hardest, most dangerous of the Old Tokaido Road. In some places, the slope was very steep and the mud was deep, making it difficult to pass even after cobblestones were later laid. It is said a woman riding the Hakone Hachiri on horseback fell from her horse and fatally hit her heads on the cobblestones. The name of the place where this is said to occurred, Onna Korobashi-zaka, meaning “woman-rolling slope,” serves as a reminder of how difficult it was to travel during those times.
-Alyona

After descending the Hakone-toge Pass, the pair arrived at Lake Ashi (Ashino-ko), across which Mt. Fuji could be seen. Lake Ashi is a tourist destination, so there are many shops and restaurants in the area. It is also possible to take a cruise on a sightseeing boat.

After leaving the lake behind, they walked along the avenue of cedar trees towards the Hakone Checkpoint. It is said that massive cedars were planted around 1660 to shade travelers from the sun and to serve as a windbreak. 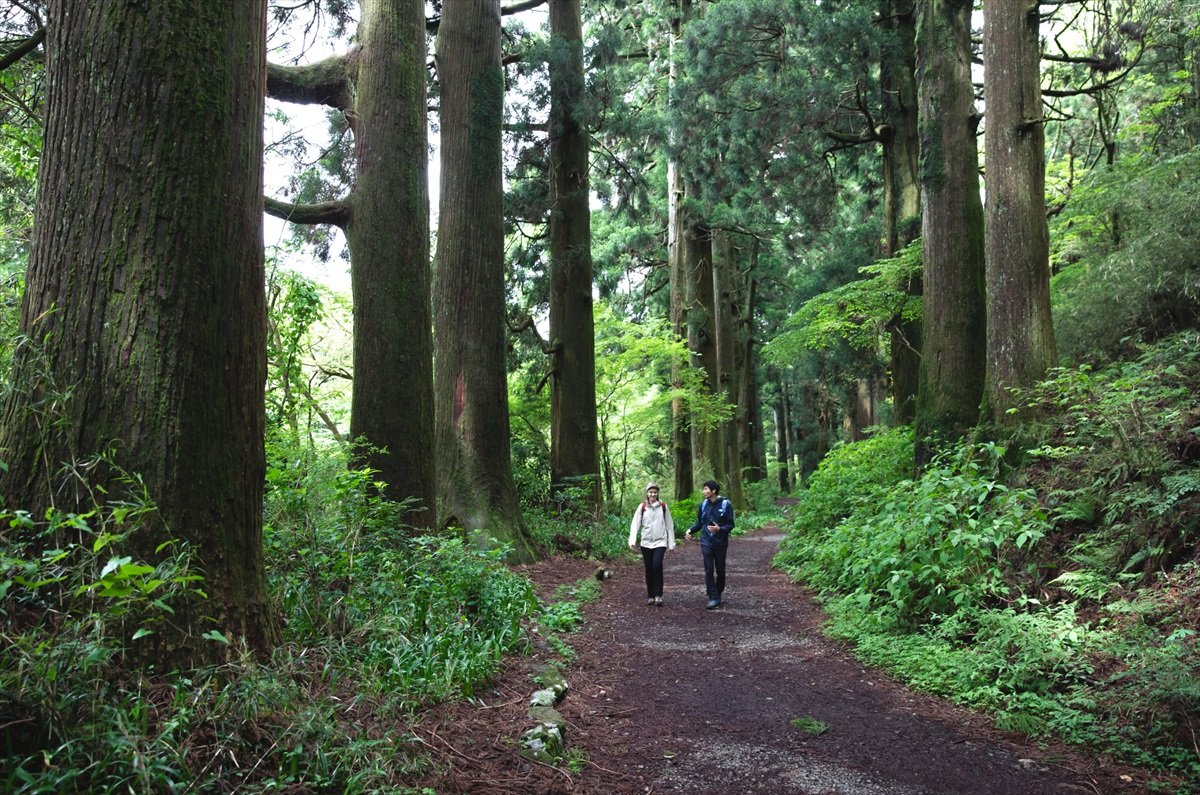 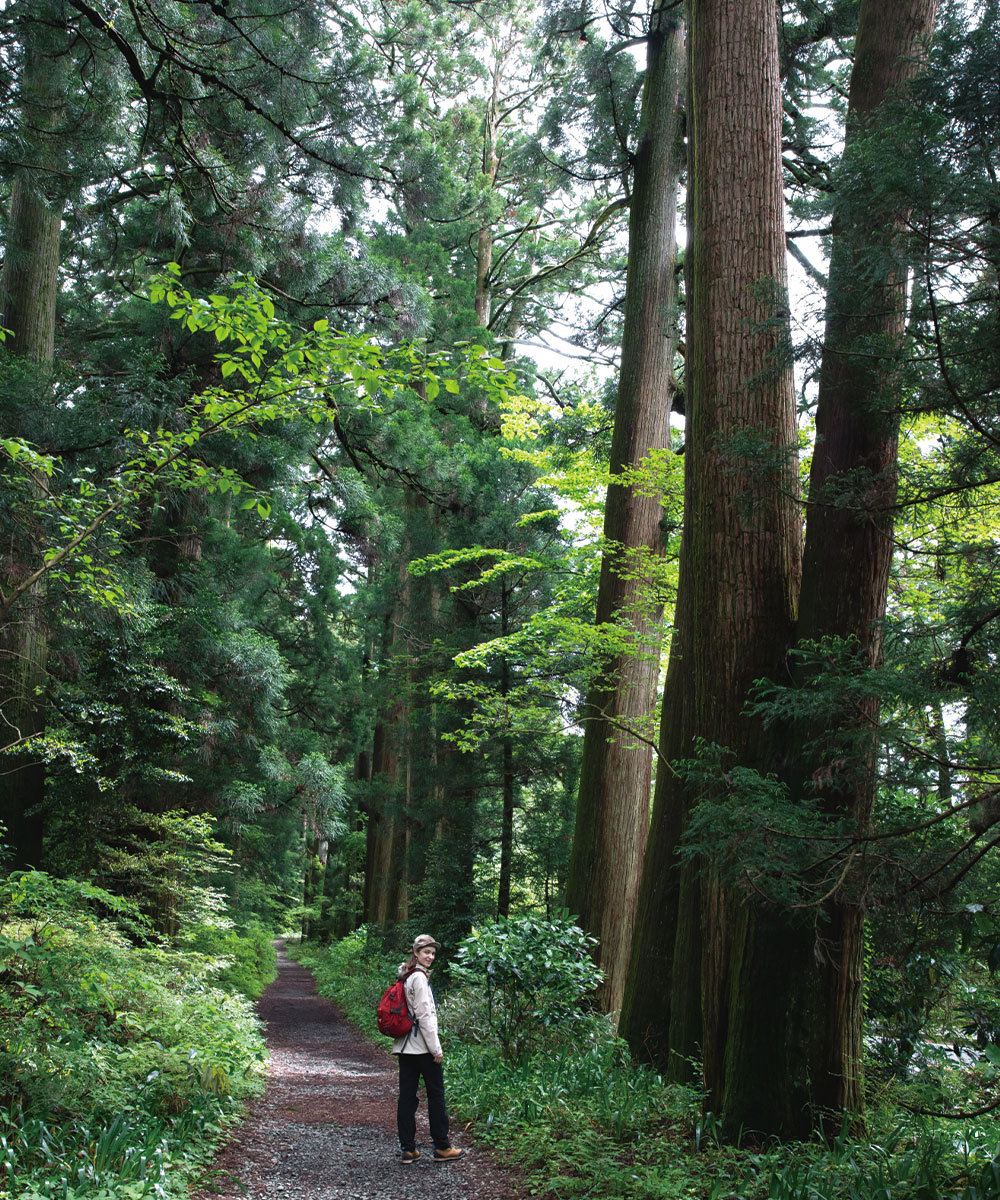 Have you ever wondered what would happen if the trees could speak? This thought occurred to me as I was walking through the avenue of cedars in Hakone. I am sure those magnificent trees would have many stories to tell us. What were people talking about while walking along this avenue? What were they wearing? What were the expressions on their faces? I am sure that these enormous cedars could answer all of my questions. Since they do not speak, the best I can do is to imagine the past for myself. This is not so difficult in a place like this, as the scenery here has not changed much since the old days.
-Alyona

After passing through the avenue of cedars, the pair arrived at a recently-built recreation of the Hakone Checkpoint. Although their journey evocative of the Edo Period ended here, the Tokaido Road originally stretched all the way from Edo to Kyoto.

Looking back at the journey...

After walking around Hakone Hachiri and listening to stories of the past, it occurred to me how convenient the world has become. You can reach just about any destination without danger. I felt the strength of the people who once endured this long and hard road. As I did not walk the Hakone Hachiri long enough to grow tired and also faced no danger, I was able to enjoy the beautiful nature. I wonder if people in the past were able to enjoy this beauty the way I did. I was lucky enough to walk the Hakone Hachiri on a day after rain. The scent of the forest was so indescribably pleasant that I cannot express my emotion with words. This scent and the sight of the fresh green leaves helped me forget all my worries.

I also enjoyed the taste of the authentic amazake at Amasake Chaya. The rice cakes and amazake are still made the same way they did in the Edo period , and I could not help but wonder if I really had what people ate in the past.

This thought underscored to me the importance of preserving the culture and traditions of the past and passing them on to the next generation. 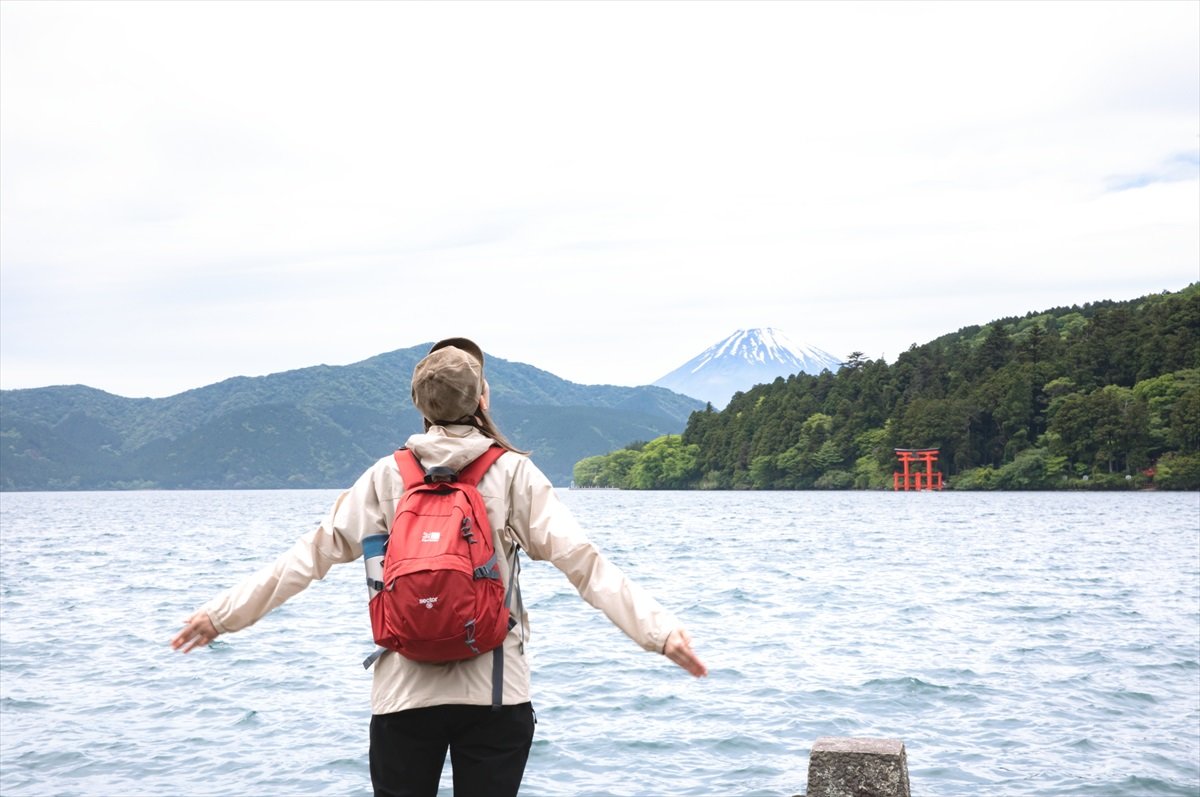 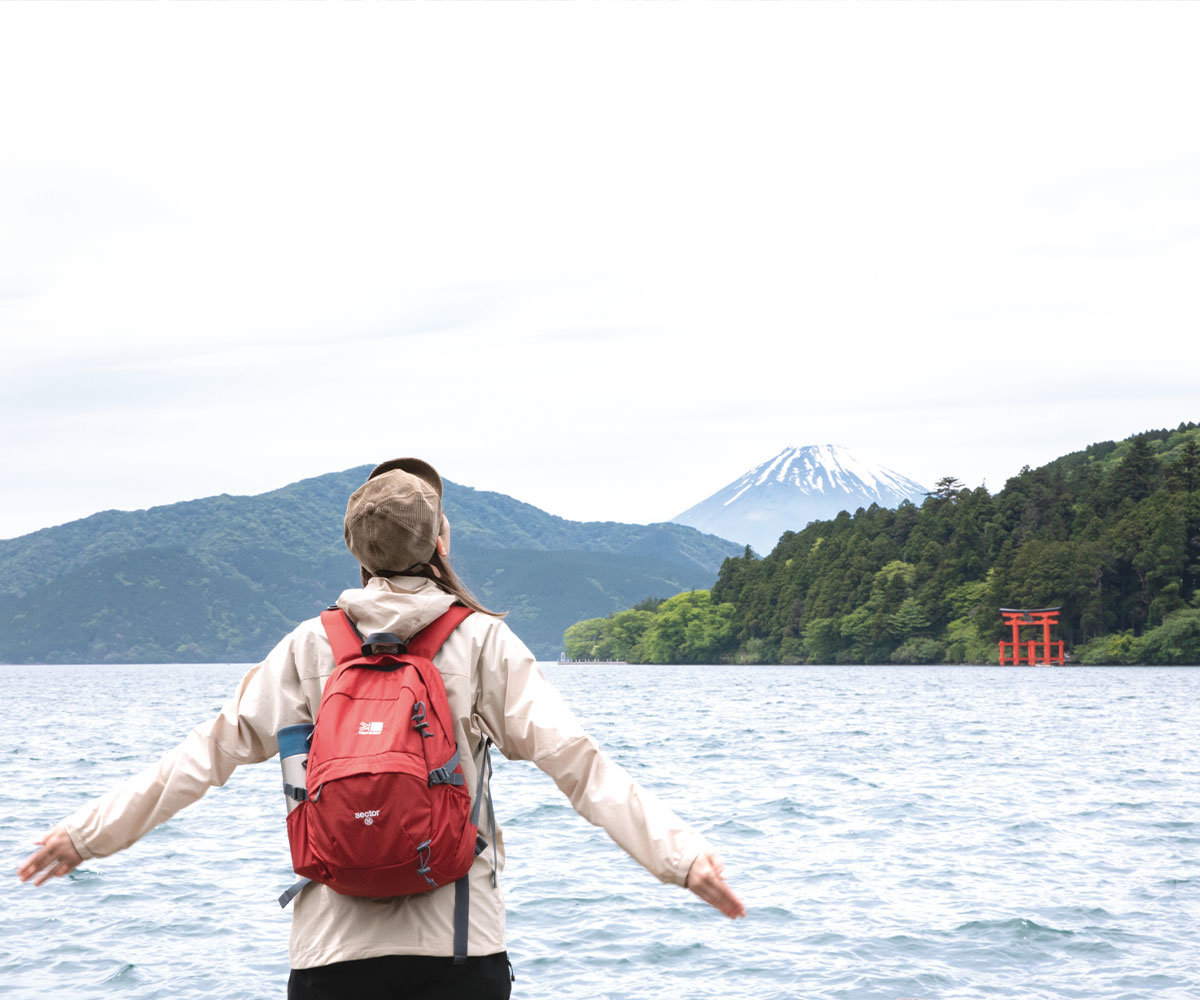 About Alyona
Alyona was born in Russia and lives in Tokyo. She posts videos of her visits to Japanese tourist destinations and her hikes online. She is currently studying public policy in Japan as a graduate student. YouTube

The Old Hakone Highway: Tracing the Edo Period Journey
Take the bus from Hakone-Yumoto Station and get off at the Sukumogawa Bus Stop. You will start walking from here. You can also take a shortcut by riding the bus that runs along the road to the Amasake Chaya. It takes about 2 hours if you chose to walk. After taking a break at the Amasake Chaya, walk the cobblestone road, cross over the Hakone-toge Pass before descending it down to Lake Ashi. After passing the avenue of cedars, you will arrive at the reconstructed checkpoint.
Mountain Guide

Take the Romancecar from Shinjuku Station to Hakone-Yumoto Station (80minutes).