Pyramids of Primeval Japan : the myths and lore, particularly related to the mountains : JINJA-GAKU 4 | HIKES IN JAPAN

Pyramids of Primeval Japan
: the myths and lore, particularly
related to the mountains

Pyramids of Primeval Japan :
the myths and lore, particularly
related to the mountains

Japan was the origin place of pyramids!?

When I was a kid, I found a random book in a secondhand bookstore. Flipping through its pages really grabbed the attention of my adventurous spirit. According to that book, the astonishingly unique structural remains known as the pyramids, which we were taught belonged to some foreign country far far away, also existed in Japan. The book even suggested that Japan was the origin place of pyramids, and that the very first one was built here in Japan. According to the author, it was called “日来神宮”（“hiramito”, which in Japanese sounds very similar to the word “pyramid”）, and the kanji characters used for the word suggests that it originally meant “The shrine where the sun deity arises”.

That book, Pyramids of Primeval Japan (only available in Japanese) was written by Katsutoki Sakai and published in 1934.

If you are older than me (I was born in 1972), you might recognize his name or the book title, and you might even have heard of his theory that pyramids originated in Japan. This old book, now more than 80 years old, was a very tricky book to comprehend for an elementary school kid, but it still dazzled me with the crazy idea that the pyramids everyone blindly thinks to be an iconic part of ancient Egyptian culture in fact came from Japan.

Prior to publishing the book, Sakai did an extensive field study and came to the conclusion that the oldest pyramid in the world is in fact a mountain, which has been worshipped since primeval Japan.

This mountain, Mt. Ashitake, is naturally still present at the very same spot to this day, in Shoubara city of Hiroshima. It’s unsurprising that its stunning cone-shaped slopes were probably adored and worshiped throughout history, probably even more in ancient Japan than now. It’s a big wonder how Sakai managed to pinpoint this mountain 80 years ago, back when roads were scarce and hardly anyone knew much about the mountain. And what are his arguments to support his theory of this mountain being the very first pyramid in the history of the world? 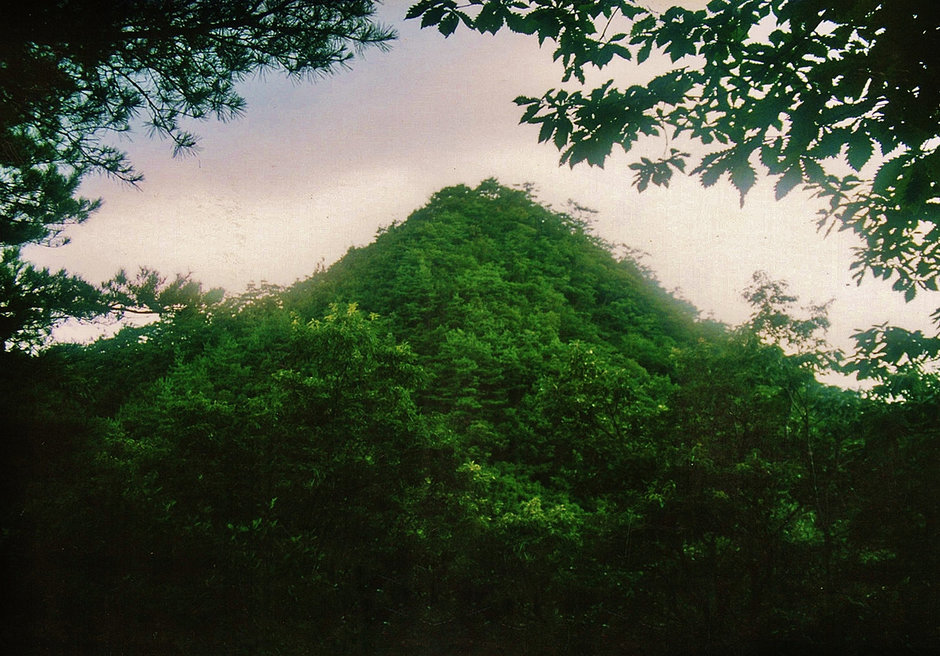 Wikipedia describes Katsutoki Sakai as an unorthodox Christian evangelist, a Japanese-Jewish common ancestry theorist, an occultist, and the discoverer of “pyramids in Japan”. These elements taken together might paint him as being a dubious guy, so let’s dig a little deeper.

He was born in 1874 up in the north, in Yamagata prefecture. He was christened at the age of 14, and then joined Tohoku Gakuin, a school created to educate Christian evangelists. After graduation, he became a professional author and took a role in publishing. In 1898 he traveled to San Francisco in the U.S., where he worked as a newspaper journalist, then studied at a music college in Chicago and at Moody Bible Institute. After returning to Japan in 1902, he set up the Tokyo Singing School and worked as a churchman, there gaining a lot of attention. For a Japanese person to leave Japan and also to have worked in multiple disciplines – an author, a musician and also a churchman– makes him a true outlier in that time.

His passion for investigating the religious and spiritual beliefs of the world never ceased and, during his military service in the Japanese-Russo War and in Siberia, he came across the Japanese-Jewish Common Ancestry Theory. In 1929, he went to Koso Kotai Jingu Shrine in Isohara-machi and got an opportunity to read and study the much-debated document, Takeuchi Monjo (竹内文書), owned by the founder of the sect, Kiyomaro Takeuchi. Even to this day, many accuse the paleographical document of being a forgery, but it include various topics of interest to Sakai, such as the religious and spiritual beliefs of people around the world, and the myth that the origin of pyramids is actually Japan, etc.. The document also cast a completely different light on Japan’s Imperial system, portrayed in the well-acknowledged historical document Kojiki (The Records of Ancient Matters) and Nihonshoki (Chronicles of Japan), and challenged the collective understanding of Japanese history. Encountering this document inspired and impacted Sakai tremendously and he published many books that described the findings of his lifelong pursuits.

It was whilst traveling the nation giving lectures on his theories and discoveries that he met one ex-congressman, Kanichi Umeda, from whom he learned about Mt. Ashitake. Umeda said that, near his hometown, there was this mountain where many gigantic stones were found arranged in very organized patterns, and that it might be the pyramid Sakai long argued must be somewhere in Japan. Sakai immediately showed a strong interest, but there was practically no information available about Mt. Ashitake. Even though he went to the local government office to investigate, and interviewed the head of the local post office who had lived in the area for a long time, nothing helped him get any further. He went to the local village, Shoubara in Hiroshima, and continued his field investigation, but that did not go smoothly either. He circled around and around the region for quite a while, and eventually he was taken to an elementary school headmaster who provided him with a wealth of information.

His pursuit of religious and spiritual beliefs started very early, while he was a little child, and during his journeys he accumulated a wide range of discoveries and learnings. Yes, he did end up being an advocate of extreme theories, but nothing stopped him on his way and he never gave up. The end result was the book I bumped into in the secondhand book shop as a boy, Pyramids of Primeval Japan (only available in Japanese).

I can only imagine how difficult it must have been for him to challenge the deeply rooted norm perceptions and understanding of society at that time, but I am truly grateful for his work in his life because, 60 years later, it was reading his book that kick-started my lifelong journey of exploring and investigating the myths and lore of Japan, particularly related to the mountains of this country. I have to admit, I didn’t buy his pyramid theory when I first read it. But I have been to the area, Shoubara in Hiroshima, many times since then and every time I go there I find many convincing elements to support his story.

It isn’t hard to find the start of the trail up the Japanese pyramid – it’s well signed. When I took my first step onto the mountain, I tried to remember the sensation I got when flicking through those pages and finding out about the mountain as a kid. It was magnificent. Gigantic stones are spread across the area. The adjacent mountain, Mt. Kigyo (鬼叫山: “demon screaming mountain”), has some very man-made-looking features including a direction-indicating stone, dolmen and an altar. From there, you can look out to Mt. Ashitake and it looks particularly beautiful, a palace-like cone-shaped structure, with its sloping skirts extending like an isosceles triangle. I myself too concluded that Mt. Kigyo must have acted as a place where people came and worshipped the pyramid mountain, Mt. Ashitake. 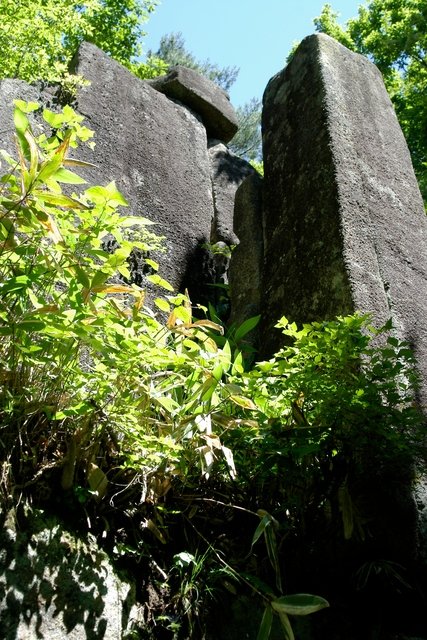 I shall stop elaborating on the mountain here. I would love for you to study Sakai’s theory yourself and see the mountain with your own eyes. When you hike across the mountain, you might keep bumping into various remains, crystallizations of our ancestors’ faith and prayers. The mountain challenges our blind belief in so-called unquestionable understandings or common sense. We need to reequip ourselves of the sensitivity to question something handed to us unquestionably, or we might become numbed and lose our inherent ability to notice all these great hints that our ancestors left in the environments around us.

I have no way to conclude firmly whether Sakai’s theory of Mt. Ashitake being the very first pyramid is true or not. But what stands as unshakable truth are the various sacred sounds of nature I hear as soon as I step onto the mountain – with a sense of awe towards the mountain, a breeze on my skin, the great colony of magnificent, gigantic stones which appear abruptly in front of me, and the gracefully beautiful look of Mt. Ashitake when observed from Mt. Kigyo. I find myself putting my hands together to pay my respects to all of these. These things, plus my inherent reactions towards them, are what tell me to exist in what is definitely a holy space, where what exists beyond mankind’s actions are honored and respected.

There is in fact another theory, this one around Mt. Kigyo. In this theory, the colony of the gigantic rocks on the mountain is said to be the mausoleum of Emperor Jinmu. According to the myth of how the nation of Japan was made, Emperor Jinmu was the very first emperor. The story tells of how Emperor Jinmu united the nation, conquering various regions from West to East. According to the document which tells this story, he stayed in the region of this mountain for eight years. That analysis of the myth and hence the formulation of the theory then spread in the early Meiji Era (1868-1912). For a while, many people from around the nation rushed to the mountain, hoping to dig up treasures which were said to have been buried with the very special emperor.