Mountains of Kyushu | HIKES IN JAPAN 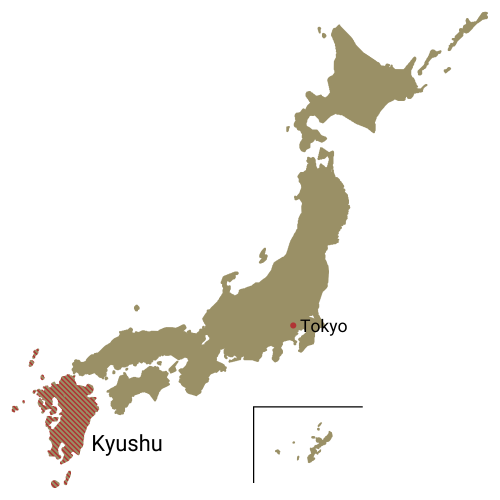 Kyushu is the area located southwest of the Japanese Archipelago. The mountains in Kyushu are less than 2000 meters in elevation and are blessed with a mild climate. The region is also characterized with many volcanos. Being a volcanic zone, the area also houses many hot springs, offering hikers a nice soak after a hike. Although snow rarely accumulates during the winter, frost can be occasionally observed in the mountains with higher elevation such as the Kuju Mountain Range (Kuju Renzan). Another charm of the highlands of Kyushu are the Miyamakirishima (Rhododendron kiusianum , or commonly called “Kyushu Azalea”) and other alpine flowers.

The Tsukushi Mountain Range (Tsukushi-sanchi)is located close to the urban area in the northern region of Kyushu, with a series of volcanos, including Mt. Yufu (Yufu-san), Mt. Tsurumi (Tsurumi-dake), the Kuju Mountain Range, Mt. Aso (Aso-san) and Mt. Unzen (Unzen-dake), located to the south.

The Kuju Mountain Range consists of ten mountains, including Mt. Nakadake (Naka-dake) at 1,791 meters, the highest peak in the island of Kyushu. The area is highly popular among not only local hikers but nationwide. Many hikers visit especially from late May to early June, when Miyamakirishima are in bloom.

Mt. Aso is a volcano consisting of several peaks, located in the center of the Kyushu. It represents one of the active volcanos in Japan and is also a popular tourist resort.

The mountain groups of the Sobo-Katamuki and the Okue are located on the prefectural border of Oita and Miyazaki. They are all steep mountains with rocky peaks, requiring experience to climb.

The Kirishima Mountain Range (Kirishima-renpo) runs north to south on the prefectural border of Miyazaki and Kagoshima and is a mountain group consisting of many extinct volcanos. In the range, Mt. Shinmoe (Shinmoe-dake) is especially active and the area around its crater is off-limits.

Mt. Kaimon (Kaimon-dake) is a conical mountain located at the south edge of Kagoshima Prefecture and has the nickname “Satsuma Fuji,” taken from the olden name for Kagoshima Prefecture, “Satsuma.” It is also one of Japan’s 100 most famous mountains.

Hiking on active volcanos may be restricted depending on the activity level of the volcano. Make sure to check the information before hiking.